Weldcraft-Pro™ is part of Speciality Enterprises and is the tradename used for our underwater welding course. Its owned and run by David Keats (former MD of Speciality Welds Ltd). Our former headquarters in Cleckheaton are shown above. Although please note, we now have a new workshop in York; 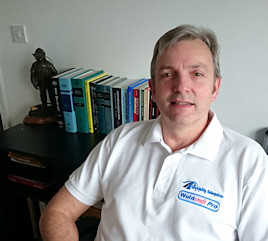 David J. Keats, former Managing Director of Speciality Welds Ltd, is now the proprietor and subsea welding engineer for Weldcraft-Pro (trading division of Speciality Enterprises). David has been involved in the welding industry since 1975, having initially worked as a welder for a structural engineering company, but he has also worked in the following welding industries:

In the early 80’s he gained qualifications in NDT; including WI, UT, MPI and DP inspector. In 1983, he qualified as an HSE Part 1 commercial diver and was involved with many wet and dry hyperbaric welding operations, both offshore in the North Sea, Middle/Far East and also within the UK's civil engineering sector. In 1987, he set up Hydromech Technical Services Ltd. A company providing welding, inspection and welder training services. In 1988, he qualified as an instructor with STA College and completed other TWI technical welding qualifications. In 1990, he wrote his first book 'The Professional Divers Manual on Wet Welding', published by Woodhead Publishing. In 1991, he introduced the UK's first National qualification in underwater welding, through The Marine & Engineering Training Association and began offering training both in the UK and overseas. In 1994 HTS became an approved M&ETA assessment centre. David continuing with his studies and in 1992 qualified as an International/European welding technologist and received his Diploma in welding engineering and technology from TWI. In 1997, he gained a ONC and HNC Certificate in metals technology from Bradford & Ilkley College. In 1998, he opened the AMTC Underwater Centre in Perth WA, working with the local TAFF and Core Technical Services Ltd. In 2000, he qualified as a CSWIP Senior Welding Inspector and in 2002, started Speciality Welds Ltd. In 2003, he was appointed committee member to the BSi /ISO underwater welding group. In November 2003, he was the Winner of the DTI 'Smart Award', for a new underwater welding process called Hammerhead wet-spot welding. In 2004, he published his second book; A Welder’s Mate, published by Troubador. In 2005, he became an accredited welding surveyor for Zurich Engineering Risk Services, part of the Zurich Insurance Group. In 2006, he submitted a Chartered Engineer thesis to TWI. In 2007, he was the Winner of the Subsea Achievement Award for Innovation.

In March 2015, he sold his shares in Speciality Welds Ltd to the AIS Group, where he continued acting as their welding consultant until October 2016. In October 2016, he left AIS to concentrate on his underwater welding business WeldcraftPro. In 2017, he re-certified (PCN) in liquid penetrant and magnetic particle level II. Also in 2017, David gained approval from the Steel Construction Certification Scheme as a RWC for execution class 4 and lower.

To date, David has spent over 42 years in the welding industries and throughout his subsea career, he has designed, developed and manufactured the following underwater products:

David continues to work, part-time, within the subsea and engineering industries, working on research and development for improvements to underwater wet welding, as a surveyor for Zurich, as an NDT and welding inspector and welding engineering consultant. 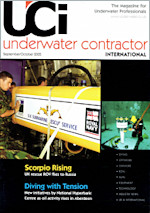